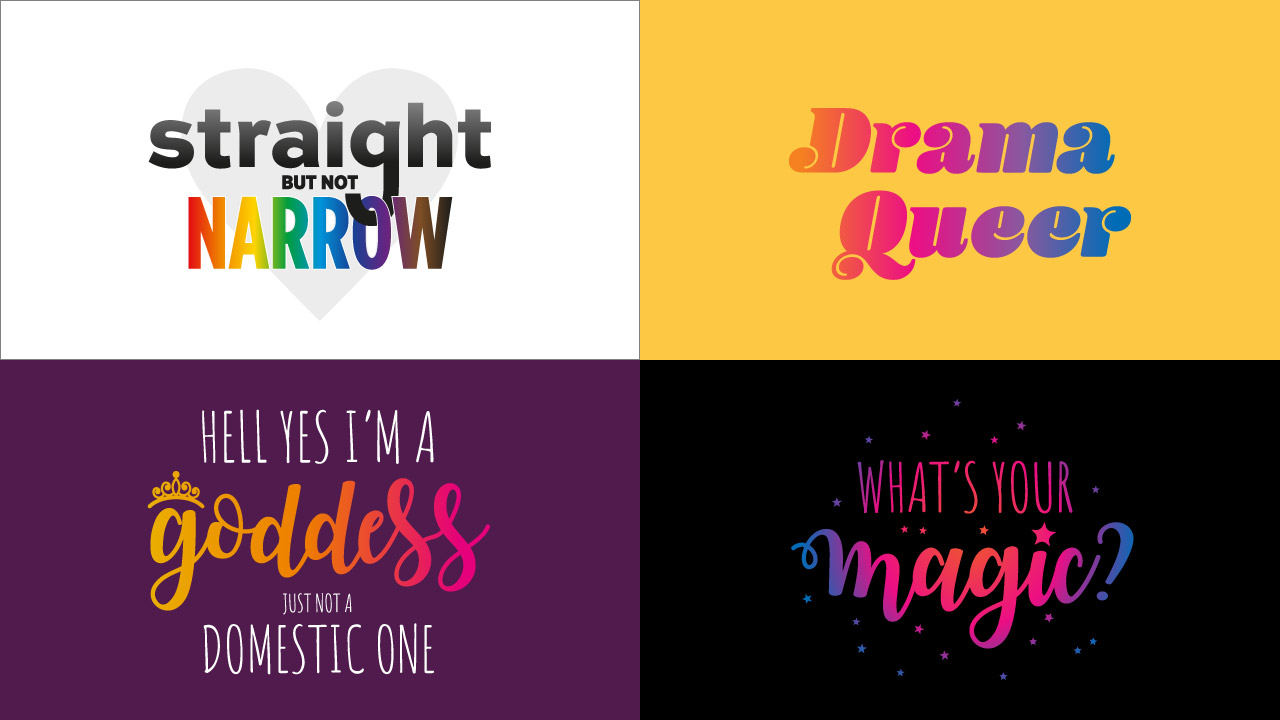 I’d been thinking about designing t-shirts for a while, and when a client asked me to save some artwork for her t-shirt store, I thought it was time to get my own out there.

She had researched the options, so that saved me a lot of work. I decided on Teemill, a print-on-demand service for t-shirts and tote bags.

I was pleased to find that they operate very ethically:

Full disclosure: it’s not a huge earner – t-shirts sell for £19 (you can only change the price on the Pro account), of which you get between £2.50 and £4.50, but I really like the idea of being able to bring my designs out into the world 🙂

Here are some of the designs I’ve been playing with. They’re available in a variety of colours and styles of t-shirt, and some tote bags too. Click on each one to take you to the store (Straight But Not Narrow coming soon) or read more about the designs below the images.

“Straight But Not Narrow” t-shirt design

I knew I wanted to use the full rainbow (including the brown and black of course) for this, and I needed a chunky font. I especially wanted the word ‘narrow’ to be in a condensed font. I chose Gotham Condensed for ‘narrow’, but the ‘straight’ needed something… different.

I ended up with a font called Sweet Sans Pro (Adobe Fonts) for ‘straight’ and in lower case, to make it a bit more dynamic and playful. I liked that.

I also wanted to bring in an element to tie it together more; to create a relationship between the two words; to create a feeling of support. So I extended the tail of the ‘g’ in straight, to hook into the ‘o’ in narrow – and positioned the last ‘t’ in ‘but not’ to sit above where the tail comes up.

Then I gave the word ‘straight’ a slight gradient to create some more depth.

Using the rainbow in all of it was overkill, so I decided to use it in the word ‘narrow’ only. I also wanted to tie the shapes together so put a faint heart in the background.

I wanted something retro but with a modern feel, so when I came across the Blenny Black font (in Adobe Fonts) I knew I found the right one. I love the swirls!

I loved the swirl of the Q, but the D was looking a bit bland. I wanted to give that a nice swirl, too. I took it from the ‘r’, flipped it and put it in the right place.

Also, I wanted it italic rather than upright. The font doesn’t come with an italic option, so I skewed it manually.

Filled it with a (partial) rainbow, et voilà! 🙂

I wasn’t overly keen on the capital G in the script font, but the lower case was not quite right either. So I adjusted the lower case letter a bit until I got the desired result.

Also, I had the idea to add something along the lines of a Victorian cleaners outfit head covering, but it turned out more like a tiara 🙂

Again, I tried a variety of colour gradients, and decided on starting with a goldy yellow on the tiara end and keeping it in the warm spectrum.