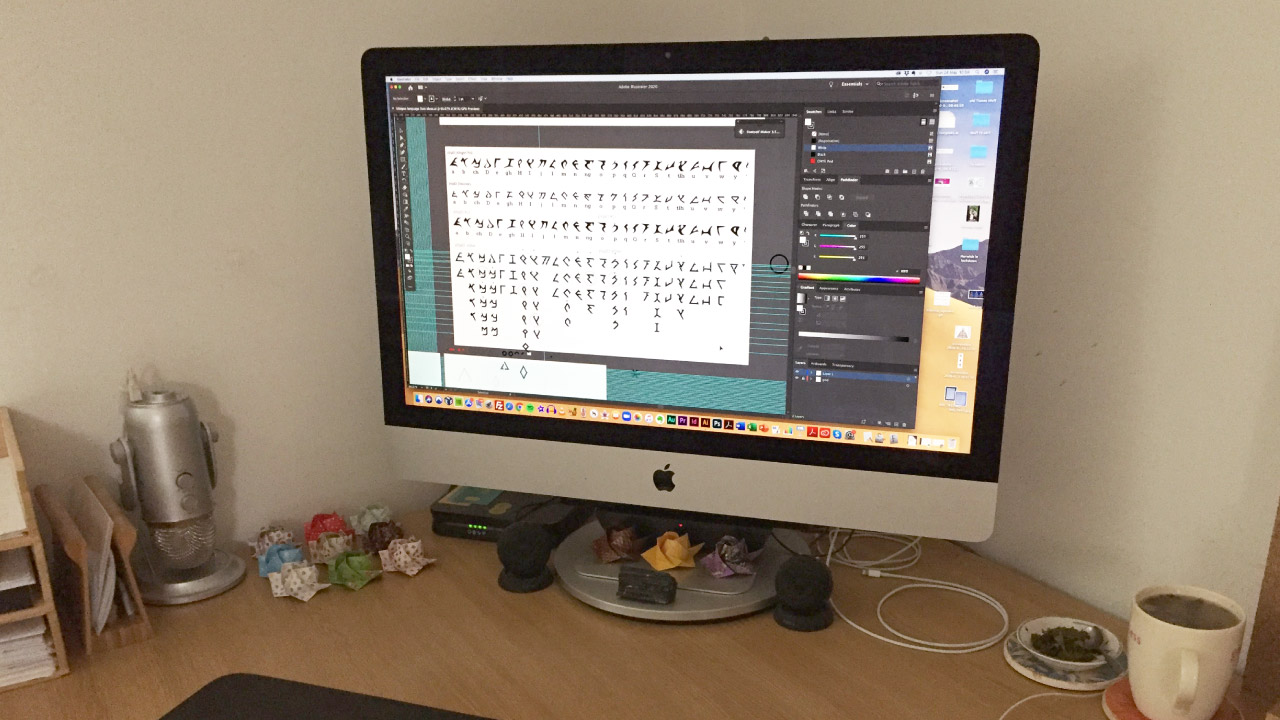 What learning Klingon taught me

If you’re a Trekkie, a Klingon enthusiast, a bit of a nerd or love languages and conlangs (constructed languages), you may enjoy this post. If you’re all four (like myself), you may just love it.

The Klingon language (tlhIngan Hol) – a journey of Discovery

After watching Star Trek: Discovery for the second time a while back (in the first round I didn’t get to the end) I was especially impressed with Tyler’s (played by Shazad Latif, who is certainly easy on the eyes – but I digress) pronunciation of the Klingon language, which is abundant in the series.

I’d been learning Japanese on Duolingo for a while and discovered that they also had a Klingon course on there. Qapla’! Down the rabbit hole I went.

I already had a copy of The Klingon Dictionary by linguist Marc Okrand on my book shelf, which had been there for many years, and mostly remained unopened, except for fleeting moments of appreciation for it. I dusted it off, and did a deep dive into the pronunciation guide.

I was fascinated. Some of the sounds are different to English, and I realised that one particular sound, ‘tlh’, is much like the ‘tl’ sound in the Tlingit language of Alaska (which I visited on an Abraham-Hicks cruise in 2017).

This makes sense, since the creator of the language (Okrand) has a background in Native American languages. I discovered he created the Klingon language based on a handful of words made up by James Doohan (Scotty). My inner nerd was delighted, to say the least.

Why this? Why now? My rational brain argued, “isn’t it pointless studying a language that’s not even real?”

Perhaps, yes. But in the greater scheme of things, most things are… futile, if you will. (See what I did there? 😉 ) And what’s important in my book is to enjoy whatever it is you choose to do – life’s too short for anything else.

As my curiosity expanded, I connected with fellow Trekkies and Klingon language enthusiasts, and found a dedicated Facebook group called Learn Klingon, as well as other apps and websites. I feel at home.

I also went a little crazy on the World of Books website, and bought myself copies of Klingon for the Galactic Traveller, The Klingon Way, and How To Speak Klingon (which is hilarious). There are others, including translations of some of Shakespeare’s works.

I’ve learned that following your inner guidance can be… interesting. And quite irrational. BUT, I should have known it was sound. (I did, really, or I wouldn’t be writing this.)

Firstly, Klingon is powerfully and confidently spoken, without hesitation or reluctance.

No further explanation needed for this one, right? ‘Yes please’ to all of that!

Secondly, it made me more aware of how I use my voice, and made me use my voice in a different way than I was used to.

Because Klingon is an unusual language (in its pronunciation as well as its grammar) it challenges the muscles of your jaw, and makes you use your brain differently as well. Studies have shown that learning a language has other cognitive benefits when it comes to the brain – I’m sure that goes for conlangs too.

So this has been an unexpectedly empowering and creative experience. As long as I feel drawn to it, I’ll keep learning! (Currently on a 33 day streak on Duolingo. Go me.)

The Klingon writing system (pIqaD) and making a font

Making a font has been on my bucket list for years, and a few weeks ago I started playing with some characters in the form of triangles and lines, after reading up on the history of writing and writing systems, a subject that has fascinated me since I was a kid.

My inner designer became intrigued by the Klingon language font, called pIqaD. It’s not essential in writing the language, since Klingon can easily be written using the Roman alphabet, but it is definitely cool. And looks alien.

In Star Trek: Discovery, a new, more stylised version of the font can be seen, and I wanted to expand on those characters, and develop them further.

I started playing with the characters, and got completely immersed in it for a few weeks. And so, I made a Klingon font! 🙂  Although I realised I should probably have started with something easier…

Interestingly, the more I look at and play with the characters, the more I appreciate the original pIqaD font. I hope more fans will get creative with this. I’m sure Sheldon would call it ‘Fun with Fonts’ if he had the chance.

I did find a nifty plugin for Adobe Illustrator called Fontself, so that will take a lot of the work out of it. Still, plenty of things to consider, like ligatures, keyboard keys, unicode (whatever that means), etc.

Currently discussing and considering how to approach the practicalities.

Wanna watch (or rewatch) some Trek? All the series appear to be on Netflix right now; some of the films are, too.